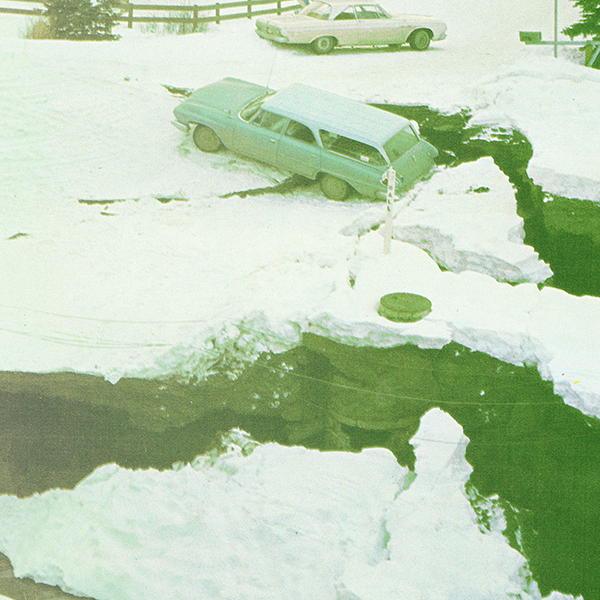 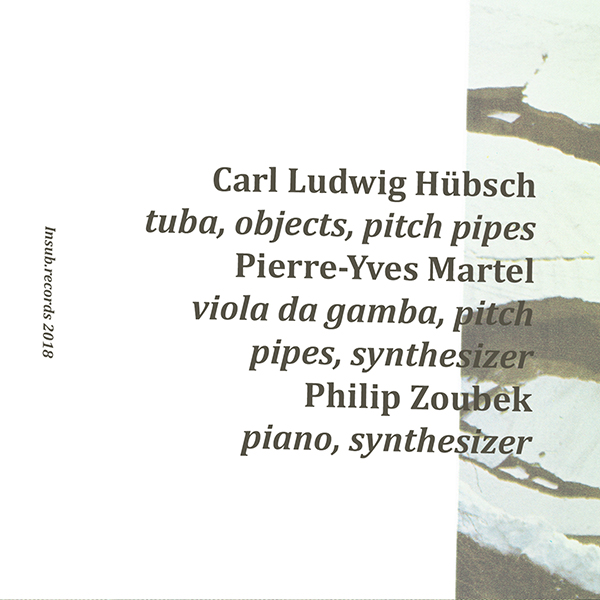 (A Flac link comes with the CD orders)

There’s a world of improvised music that never crosses that precious Yankee border, and this is group is part of that world. Take one German tuba player, one Canadian viola da gamba player and another German on piano, throw in some pitch pipes and a synthesizer and what do you have? You have the raw material for a session of highly refined interaction. On the spectrum from process-oriented to outcome-oriented improvisation, these musicians tend more to the latter pole. The piano has been prepared to render gamelan-in-a-box sonorities, the tuba’s tones consistently gravitate towards ground-liquifying depths and the strings buzz in splintered contrast. The music unfolds patiently, never lapsing into clutter or confusion, and yet it never telegraphs the next move.
Stef / The freejazz collective

The album cover art depicts a car on the edge of a surface collapse. It still has some chances, but not much. It is unclear what will happen or even whether anything will happen. At the same time, there is a strange beauty to be found in the picture. The uniformity of the color, the contrast between the white of the snow and the darkness of the earth. Both the story (will the car fall?) as the aethetics (white vs dark harmonised in a green sheen) present an inherent tension. As a viewer, your attention is captivated and you are left with a big question mark.
The same can be said of this music. Carl Ludwig Hübsch plays tuba, objects and pitch pipes, Pierre-Yves Martel plays viola da gamba, pitch pipes and synthesizer, and Philip Zoubek plays piano and synthesizer. It is their third album, and it is powerful in a quiet way. The three artists create a wonderful sonic environment that is both menacing and calming, it builds tension but it’s at the same time strangely harmonious. The combination of piano, tuba and viola is as unusual as it is effective: rhythms are fragmented yet implicitly present, minute tones are stretched and contrasted with the deep resonance of the tuba and the high voice of the viola.
Like their other albums – « June 16 » (2013) and « Drought » (2016) – the collective improvisation is tight and I would even say that it has become more subtle and precise. On the second track (of two) they use synthesisers to create a backdrop of changing and oscillating noise. Purists may cringe at the thought, but I encourage them to listen with an open mind. It works, and it increases the intensity of the piece, adding darkness and sonic density.
Listen and be captivated.
Bill Meyer / Dusted magazin

Recorded within one month of one another at Köln’s Loft music space, these trio discs combined could be entitled the two sides of Philip Zoubek. Except rather than the usual half-sweet and half-beat comparison which these banners usually suggest, the antithetical applications of the Austrian-born keyboardist are more like that of Bruce Banner and The Incredible Hulk. Not ascribing a defined temperament to ether CD, Outside, despite its title, is a contemporary Jazz trio, with Zoubek backed by Swiss drummer Dominik Mahnig and German bassist David Helm. Otherwise, Otherwise is an exploratory examination of unfussy minimalism with the pianist also playing synthesizer in tandem with Canadian Pierre-Yves Martel’s viola da gamba, pitch pipes and synthesizer and German Carl Ludwig Hübsch on tuba, objects and pitch pipes.
Helm and Mahnig, who are frequent rhythm partners and have worked with the likes of Simon Nabatov and Jacob Anderskov, appear as supporting players on Outside, leaving the direction and elaboration of the 10 compositions, all by the pianist, to Zoubek’s piano adroitness. Fully integrated during the course of two extended improvisations, Hübsch, Martel and Zoubek are more like the cooperative X-Men than mirroring the singular Spiderman and followers exploits on the other disc. On the keys, Zoubek moves decisively from swirling and vibrated chord patterns that swing intently to fine-spun judders that casually yet dramatically unfold melodies. Most imposing are tracks which offer variations on both strategies. “The Clearing” for instance, has a reflective exposition of resonating bass string plucks, balanced drum ratamacues and note sprinkles from the pianist, only to transform superhero-like half way through into a power shuffle with key fanning that crests with a crescendo of cadences at the finale. As well “Der König” is a fantasia whose introductory delicacy is soon undermined by high-frequency piano cascades matched with implements shaking on top of the soundboard plus drum rattle and double bass pops that draw away from, but never negate, the trio’s effective forward motion. At the same time piano trio subtlety shouldn’t be confused with somnolence. For example, thickened string plops and pedal-pushed piano lines steer “Distorted Chants”, while the processional keyboard march that’s the theme of “Rhetorics” follows rattling rim shots and a walking bass line. Shadowing each other’s every movement Helm and Mahnig make the perfect back-up to Zoubek’s compositional and keyboard flights.
Ensemble work by definition, Otherwise’s two extended tracks have no background or foreground. Hübsch’s hoarse tuba burbles often provide the continuum beneath the others’ timbre stretching, but in other sequences this is the result of Zoubek’s repeated inner-piano string vibrations or intervallic respite from Martel’s strings. The swirling tone oscillations from one or another of the synthesizers add a thin aural drone to the expositions, whether in counterpoint to gentling piano lines or alphorn-like plunger tones from the tuba or helping to reach a crescendo of tone-melding.
Pretty much of one piece, the captivating selections merely differ in length, with the five-minute longer “Likemind” more attuned to microtonal build up resulting from layered interaction. Before taking off during a mid section of polyphony, with twanging strings, howling brass counterpoint and accordion-like tremolo pulses from the keyboards, the track unfolds in increments like a real-time film of an unfolding blossom. In contrast, the penultimate section accedes to discordance with hocketing string rubs, dynamic keyboard strums and pitch-sliding brass glissandi. Here though discordant doesn’t mean disruptive and the hypnotic timbres are sustained for connective control to the finale.
Ken Waxman / Jazzword

This line up tells you ‘improvisation’, right? If you have been reading these pages for some time you must have come across these names. Carl Ludwig Hübsch (tuba, objects, pitch pipes), Pierre-
Yves Martel (viola da gamba, pitch pipes, synthesizer) and Philip Zoubek (pinao, synthesizer) seem to be a bit out of their comfort zones with additional instruments they don’t always play. On
November 10, 2017 they played together at the famous Loft club in Cologne, and recordings ended up as two different pieces on this CD, that is about forty minutes. Something they do, which
deems me as out of their habitat, is there is a certain rhythmic sense going on, which in some places almost sounds like a proper song structure. Not a lot, not always, but there are these instances in both pieces where this is the case. It is almost like it is planned by these players, certainly if it gets a fixed stop by all of them. Just as easily they can drift off into more regular
improvised playing, with Hübsch’ tuba and Martel’s violin playing longer sustaining notes and piano and violin contributing shorter sounds when necessary. They all use their instruments in such a way you can recognize what they are, but when it becomes more rhythmical you realize they also use the bodies of these instruments as objects to tap on. The interaction between the three players is very fine, resulting in some fine tension at times, but also going to easier passages in which there is a more relax exchange of ideas and responses. This is altogether a very fine
release.
FdW / vital weekly